The Pros and Cons of EVs 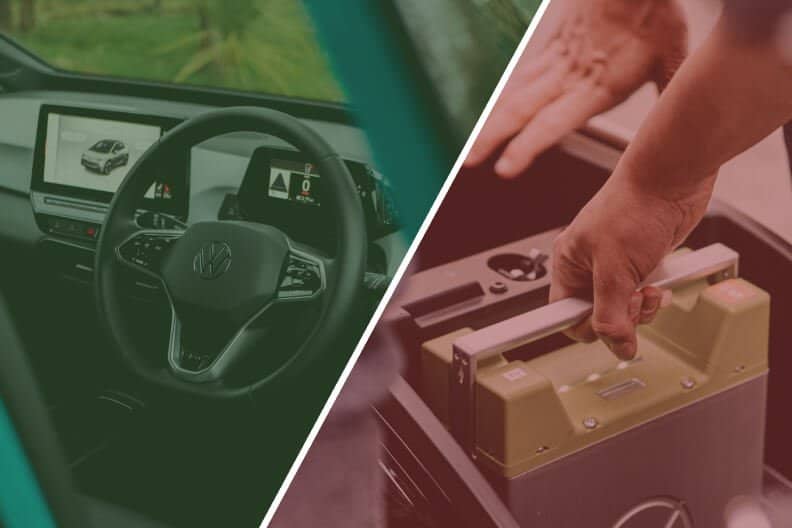 Are you planning on buying a new car? Maybe an electric vehicle? Or are you about to invest in one? There is a lot to be said about the future of electric cars and it is possible that they conquer the world, reducing our carbon imprint tremendously.

What is an electric vehicle?

The conventional answer to this question is – a car that runs on electricity with zero emissions. The more complex answer, on the other hand, is that electric cars are а relatively new concept in the world of the automotive industry and have a long way from being the dominant choice for car owners. An electric car is a vehicle that uses a motor powered entirely by electricity (electric motor). Unlike hybrid cars, electric cars do not have internal combustion engines at all.

The first prototypes of electric car models were created in 1835. They were popular in the late 19th and early 20th centuries, alas advances in engine technology and the mass production of cheap gasoline cars led to a decline in the use of electric vehicles, sadly. The energy crises of 1970 and 1980 provoked short-lived interest in electric cars, although they did not reach the stage of mass production, as is the case now, in the 21st century.

Since 2008, electric vehicles have entered their renaissance, thanks to advances in battery and controller technology, concerns about rising oil prices, and the need to reduce greenhouse gas emissions. Currently, the future of electric cars is highly dependant on the price of batteries and how quickly they can become cheaper and cleaner than the production of ICE vehicles. To solve this problem, many car manufacturers have set up joint ventures with battery manufacturers. For example, Volkswagen AG has a joint venture with Sanyo Electric, Nissan Motor with NEC Corporation, etc.

Although an electric car is considered to be the best alternative to traditional gas-powered cars, their widespread use would lead to increased electricity consumption, which in cases where it is produced in power plants, using fossil fuels, would lead to little change in the carbon imprint of a country.

This is the main reason why new supercharging EV stations are being built with canopies covered with solar panels. They provide electricity from the sun and shade for the charged electric car. In the next few years, Tesla Motors plans to cover more stations in sunny areas with solar sheds as part of the company’s environmental care.

EV charging and how does it work

New electric cars are looking for ways to drastically reduce charging time, as well as to standardize the way connectors are manufactured. Supercapacitors are also entering the market.

The normal life cycle of an electric car battery is eight to ten years, but when it comes to charging time – an electric car can take as little as 30 minutes to fully charge, but there is a possibility that it takes even more than 12 hours. Why is that? It depends on the charging equipment, the size of the car’s battery, the age of the EV model as well as its available charging capacity.

An electric car with a 60kWh battery takes more than four hours and under 8 hours to charge from empty to full with a 7kW home charging point. Though most drivers top-up charge, rather than waiting for their battery to fully recharge, for many electric cars you can add up to 100 miles (160km) of range in just 35 minutes with a 50kW rapid charger. What does that mean? Simply put, the bigger your electric car’s battery is and the slower the charging point, the longer it’s going to take to charge from empty to full.

How much does it cost to recharge an electric car?

Cost of installing a charger at home

The cost of installing a charger at home depends on a lot of factors, like the system you choose, the permitting fees in your area, and finally – your home’s configuration.

Cost to charge at home

Charging costs vary and depend on the size of the car’s battery and the local price of electricity. For example, charging an electric vehicle, such as Nissan LEAF, with a 40-kWh battery and about a 150-miles range (240km), in California would cost about $7 to fully charge. This is just one of the advantages in owning an EV, since fueling traditional gas-powered vehicles with 25-mpg gas at a gas price of $3.70 per gallon could cost $22 to drive a 150-miles range (240km). Do you see the difference?

Many owners of electric cars choose to charge them at public charging stations. The charging could be free, pay-as-you-go or based on some kind of subscription with a price set by property owners. Carmakers of cars, such as Hyundai, Nissan LEAF, and Tesla model may provide complimentary public charging at certain chargers.

If you’re owning an electric car in California, you may expect that you’ll pay 30 cents per kWh to charge. At these rates, Nissan LEAF for example, with a 150-miles range and 40-kWh battery would cost about $12 to fully charge.

Finally, we got to the most interesting part of this article for everyone who owns an electric-powered car or is about to invest in one but hesitates for one or another reason. So, to make the best decision, you have to learn more about electric cars pros and cons, their impact on the environment, the low maintenance it takes, and the difference between electric cars and those powered by petrol or diesel.

Let’s start with the cons!

Although the positive sides of owning an electric car can be quite convincing, there are also some downsides that one needs to consider before they decide to make an electric car their next big investment. Here’s why:

Electric cars have a shorter range than gas-powered cars

Even though the range of electric cars is constantly being increased, the massive electric vehicles can pass about 125 miles (200km) each day. The problem is, if you make last-minute plans about driving anywhere beyond 125 miles, it might take more than 8 hours to get to a full charge.

In addition, electric cars do not offer all the tweezers and accessories that standard car models do. Because of this, it is usually associated with an additional charge of energy from the batteries and a corresponding reduction in their mileage.

Do you know how gas-powered cars work? It takes just a couple of minutes to fuel one. But an electric car may take about 4 to 6 hours and sometimes even a day to fully charge.

No matter which station you choose, you need to have in mind that the time taken to recharge EVs is quite long and might put some people off.

With newer models and more powerful charge points, the charging time has gone down significantly and will soon be a nuisance of the past.

Compared to gas-powered cars, electric vehicles are a much bigger investment

The electric models of specific cars are usually worth more money than the gas-powered ones, but that’s pretty obvious due to the still-developing technologies of EV batteries and motors. Electric models need savings at around $30,000, having in mind that a luxury model may climb to at least $80,000. But there is no place for worries, as technology continues to evolve every next year, which will lead to similar prices in both gas-powered vehicles and EVs. For example, the 2022 LEAF model by Nissan will cost under 30 thousand dollars.

There are areas with lots of electric vehicle stations, but the problem is – this isn’t the case in every city. When it comes to long road trips, electric cars may have a hard time, since you can’t take your home station with you. That is one issue that Monta is trying to solve, making it possible for any home charge point to become a public one, and even earn a little extra for its owner. You can read more about how the Monta app works here.

Sad news for most, but depending on the type and the usage of the battery, electric cars batteries require a change every 5 to 10 years. Luckily, most governments provide grants as well as requirements of the manufacturers to replace batteries if they become obsolete sooner than 6-7 years.

Amount of pollution to manufacture an EV

This might be an unpopular opinion, but electric cars are not 100% emission-free, as it is currently more carbon-heavy to produce an EV compared to an ICE vehicle. The electricity needed for maintenance and to charge the battery fully is also not necessarily generated from renewable energy sources. One can argue that is an issue of the energy sector, and that overall energy production across the world is becoming greener by the day, yet as EVs are a huge consumer of electricity, their impact must be acknowledged.

Now let’s take a look at something as important as the cons – the pros.

Advantages of owning an electric car

There is a lot to be said here. Let’s start with…

Better for the environment

One of the main reasons buyers choose to invest in an electric car. A fully electric-powered car (not a hybrid) doesn’t use an exhaust system, which leads to – no emissions over its lifespan, which in the long run can reach close to 80% less carbon-heavy than a petrol car.

You don’t need to use gas ever again

Electric cars are entirely charged by electricity, therefore – you don’t need to buy gas ever again! Driving a fuel-based car can make you spend way too much money because we all know – the fuel price has gone too high for the past few years.

The engine of an electrically-powered car doesn’t need any work on the combustion engine or a ton of maintenance work due to the many different parts it consists of.

They give you reduced noise

Electric motors are much quieter and are capable of providing smooth drive over long distances. They run very quietly, unlike gas-powered ones, and especially when fully recharged. In some states even, legislators have considered requiring an EV to have noisemakers installed, so that pedestrians know they’re coming.

They are very easy to drive

From all the cars available on the market, electric ones have the simplest driving methods. The need to add a clutch mechanism is completely eliminated so that you can operate with only the accelerator pedal, brake pedal, and steering wheel.

No need to go to a gas/charging station

With an EV, you can have your charging station at home, leave your EV to charge up every night after work or a trip and have it ready on the next day. No need to go to a public charging station unless you are on a long road trip.

Electric cars undergo the same testing procedures as fuel-powered cars. Thanks to their low center of gravity, they are much more stable on the road as well.

And last, but not least – they are cost-effective

The more years pass by, the better technology becomes. Mass production of electric cars has led to a lower price, when it comes to investment and maintenance, thus the available tax incentives further brought down the cost and made electric cars more cost-effective.

Since we are at the end of this article, we want to thank you for staying with us until the end. We hope the information was useful and made you more aware of why electric cars are such a great long-term investment. We went through the historic hiccups of the EV industry and its current tremendous rise in popularity, and the pros and cons of owning an electric car.

You can now make a better choice, considering your own needs and possibilities. There are a few disadvantages to driving such a car, but the benefits are so much more and truly worth it for a cleaner, greener planet.